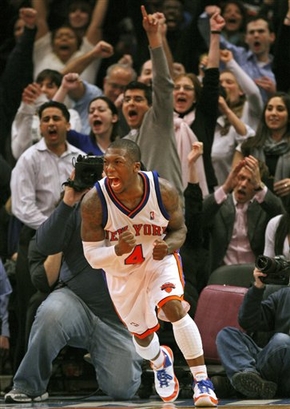 Pretty much sums it up.
(AP: Kathy Willens)

Nate Robinson torched the Indiana Pacers for a season-high 41 points to push the New York Knicks to a 123-119 W at Madison Square Garden.

This game had equal parts strange, ugly, wild and fun. Oh, and plenty of frustration for the Pacers in the final minute of the game.

Ugly made an appearance for both teams throughout the game, but it teamed up with strange in the first quarter when two teams that love to push the pace struggled mightily to push the ball in the basket. After one quarter, the Knicks were up 23-20 and early in the second quarter Clark Kellogg captured the quality of play perfectly when he said, "At some point an NBA game is going to break out here."

From that point on, some NBA caliber scoring broke out big time. Defense? Er, not so much. But the wild offensive fireworks at both ends made for an excicting game over the final three quarters. There were crazy numbers from unexpected sources as the Pacers scrapped for all 48 minutes while playing without Danny Granger and Mike Dunleavy as expected, but also minus T.J. Ford. Ford and Marquis Daniels arrived in New York battling a virus. Quisy obviously felt much better since he played heavy minutes.

The desperate team effort from the Pacers couldn't sneak a W out of the Garden, though, when no one was able to make a play, or even a play to get to the play, late in the game.

After Jarrett Jack put the Pacers up 119-117 with 1:01 left, Nate Robinson drew a foul at the hoop and tied the game at the line. The Pacers went the other way and Brandon Rush's shot was blocked and then deflected out of bounds with 4 seconds left on the shot clock and 30 in the game.

On the baseline, Jeff Foster couldn't find anyone to inbounds the ball to, so he called a timeout leaving the Pacers with one. After the timeout, the Pacers spread the floor as they did on the first failed attempt, with Jack and Troy Murphy trying to screen each other. No one was open and then Marquis Daniels zigged when Foster thought he would zag and Foster lobbed the ball right into the hands of Nate Robinson who took it the other way to put the Knicks up 121-119.

Why did the Pacers run the exact same inbounds play twice in a row? Especially with Jack appearing to be option one while being covered by Robinson who could play DB in the NFL. The execution was as bad as the play and when Troy Murphy traveled on the next possession, the valiant effort by the Pacers fell hard in the loss column.

Plenty of individual thoughts from this one: