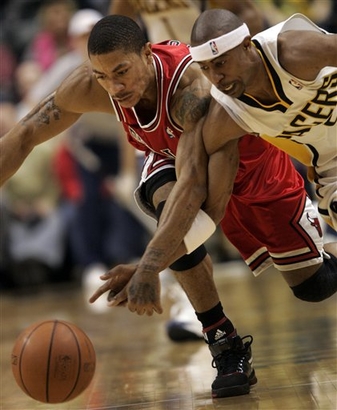 T.J. Ford would win this loose ball scrap which helped push
the Pacers ahead down the stretch. (Photo: AP/AJ Mast)

Sometimes it appears difficult to crank up the intensity for a day game, but the Indiana Pacers were able to fire up some afternoon defensive toughness to stay in a tight game long enough for the offense to close out a home W over the Chicago Bulls, 98-91.

This game had a strange feel to it but was played with a great vibe to it for a random regular season day game. The vibe was courtesy of a big crowd thanks to the Bulls being in town and the Pacers offering the faithful plenty of opportunities to cheer. The strange-ness factor was apparent thanks to the still unfamiliar combinations of players for both teams.

The Pacers played shorthanded without Danny Granger and Mike Dunleavy, although Jeff Foster was available and played 20 minutes. As for the Bulls, they played what can best be described as too-many-handed, as coach Vinny Del Negro began incorporating new faces, Brad Miller, John Salmons and Tim Thomas into the playing rotation.

Del Negro hasn't exactly thrilled Chicago with his coaching, so putting together a game plan with a team in transition and new faces in uniform, definitely favored the Pacers today.

The story of the game, though, was how the second half unfolded. The Pacers pushed a one-point halftime lead to 14 when Maceo Baston scored on a putback with 5:46 left in the third quarter. Shots were falling, including threes from Jarrett Jack and Marquis Daniels, and the Pacers just seemed a step quicker to the ball. Baston's putback was the Pacers' fifth offensive rebound of the quarter.

Then things changed in a hurry. Baston's putback would be the last field goal the Pacers would make over the next eleven minutes. In that time, the Pacers missed 13 shots and lost every bit of that lead. In fact, the 14-point lead at 5:46 in the third was down to one point with 2:01 left.

That left eight minutes of game clock with no field goals for the Pacers, but they were able to keep the Bulls shooting jumpers which Bulls were struggling with, as well. When Troy Murphy finally ended the shooting drought with 6:43 left in the fourth quarter, his three pointer tied game at 80.

While the Pacers defense remained stingy for the rest of the game, T.J. Ford played the role of closer, carrying the offense down the stretch with everything from a 3-ball to a dunk to keep the W secured until the final buzzer.

Once again, another outstanding team effort in the face of minimal expectations provides the winning formula for the Pacers.