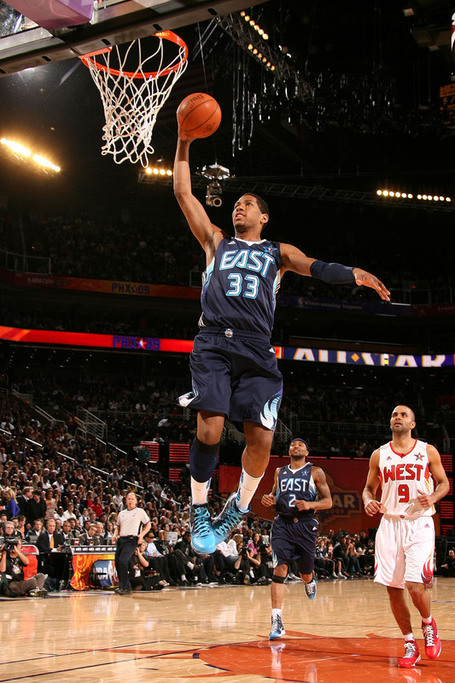 After touching on the hype around Danny Granger's All-Star Weekend and David Stern's reaction to the Pacers' financial issues, it's time to focus on Granger's actual involvement in the All-Star Game.

This shouldn't take long since Granger's appearance in Sunday's spectacle was limited to 10:43 split up into a couple of little runs in each half. Danny finished with one rebound and two steals along with a dunk in transition complete with an All-Star approved extra step.

The biggest news, though, is that he's availble to play the Sixers tomorrow night. I was real happy to see Danny involved in the event but was hoping he wouldn't log too many minutes. In fact, I was hoping he'd shut it down after his first half run.

Danny was willing to take it easy with the knee but according to Jeff Rabjohns he also had to fight for the minutes he did get.

That's all I want to hear, "I'm fine." This was a great weekend for Granger to introduce himself and his game to the masses. Hopefully, there will be many more All-Star games in his future and he can eventually have a big impact on the game itself.

Until then though, the Pacers need a win against Philly on Tuesday. to begin a last gasp effort at a playoff run. So after soaring amongst the NBA's galaxy of stars, it's back to reality for Granger as he and his Pacers teammates have to get to work on some wins.

Don't miss Danny's blogs on the weekend with his impressions after the game, as well as his thoughts on the three-point contest.