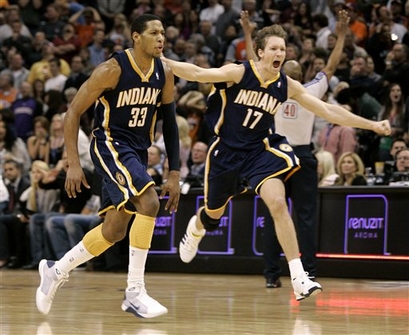 That was Mike Dunleavy's declaration after describing a replay of his inbounds pass to Danny Granger with 0.9 seconds left which Granger caught, turned and splashed from 3-land to break a tie and give the Pacers a hard-fought road win over the Phoenix Suns, 113-110.

The Pacers needed all 48 minutes on Wednesday night as they appeared headed for overtime and possibly blowing another game they had controlled through three quarters and led until Leandro Barbosa hit a 3-ball to put the Suns up 110-108 with 45 seconds left. Yep, the Pacers led the game, at one point by as much as 16 midway through the third quarter, for 47 minutes and 15 seconds and then let the Suns swoop in and take the lead.

The way the season has gone to this point, once the lead evaporated completely, there appeared no way the Pacers could win. They went ice cold in the fourth quarter, started taking too many jump shots and hitting the front rim way too often. At one point, they were 1 of 9 from 3-land. You could feel the tension all the way back in Indy. The Suns struggled to score themselves but eventually had enough opportunities to grab the lead. Losing this game began to feel like a force of nature no human in blue and gold could stop.

But in the final 45 seconds, Danny Granger stepped up and provided a superhuman effort to take back the lead for the Pacers and secure a W that was rightfully theirs. With 34 seconds left and the Pacers down two, Danny pulled up and knocked down an 18-foot jumper which was well defended. He had to hang and cock the shot a bit more than usual, but stroked it clean to tie up the game. Huge.

The Suns looked to take back the lead when Amare Stoudemire settled for a jumper with 11 seconds to go. Somehow, the Suns secured the miss. With Terry Porter and everyone else in the arena screaming for a timeout, Jason Richardson pulled up to shoot and miss a tough jumper with three seconds to go. When Jeff Foster secured the rebound, the Pacers had 0.9 seconds left for Granger's game winner.

In the comments, Peter from Sixty Feet, Six Inches mentioned that he might die of heart failure after a few more of these crazy finishes. He brings up a good point. If I ever have to visit a cardiologist in the future, I'm definitely going to have to list the 2008-09 Indiana Pacers season as a pre-existing condition. No doubt the doc will give me a knowing nod.

More notes on the W: