Share All sharing options for: Knicks 122, Pacers 113: Knicks Make It Rain Inside Fieldhouse 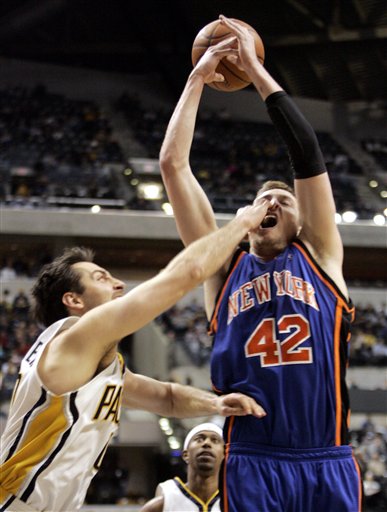 Stop me if I get too technical here with my analysis, but the New York Knicks shot the ball much better than the Indiana Pacers and left the Fieldhouse with a 122-113 win.

You can't say either team played worse defensively than the other or better offensively for that matter. Both teams had plenty of opportunities to score but the shots the Pacers were making last night were off tonight. I mean, they had 100 FGAs for Slick's sake and made it to the line 25 times. It just wasn't meant to be tonight.

The Knicks meanwhile are an improved team that matches up well against the Pacers. Their lack of interior presence is washed out by the Pacers similar lack of a threat in the post. In fact, the Knicks not only started Jared Jeffries at center but they then had him guard T.J. Ford for the first six minutes of the game. Jim O'Brien tried to use Roy Hibbert to gain an advantage down low, but the big fella wasn't quite up to the heavy lifting.

The game turned in the second quarter when the Knicks rained down eight three-pointers and outscored the Pacers 38-27. With the double-digit lead established at the half, the Knicks were able to maintain it  for the most of the second half until a too little, too late run by the Pacers closed the lead to seven.

The Pacers simply couldn't keep up. All the missed shots were a by product of this being a back-to-back game and their fifth game in seven days. The Knicks were fresh, having not played since Wednesday.

A few other thoughts: