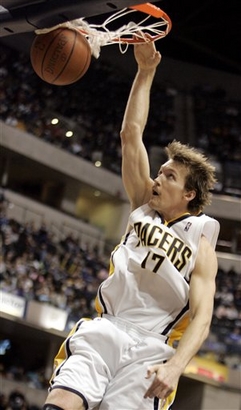 Mike Dunleavy missed his first three shots early in the first quarter as his game appeared stuck in preseason mode.

Then midway through the first quarter - bang!

Dun drew a "Boom, Baby!" from Slick on a 3-ball and went on to finish the night shooting 10-15 from the floor including 4-8 from 3-land for a breakout, 30-point game. After making that first bomb, Dun went to work inside, making buckets around the rim and going to the line which really put him in a nice shooting rhythm. Suddenly he was on fire from all over the court, scored 18 second-quarter points and finished the half with 23.

At the other end of the floor, the Pacers made the Heat work for buckets most of the night. The defense combined with a heavy dose of 3-balls on offense to produce a rare, stress-free finish and 114-103 win. The win was the Pacers' seventh straight at the Fieldhouse. It was also a head-shaking 13th straight home win over the Heat.

For the Pacers, the key to cruising through the second half with a double-digit lead was taking care of business in the second quarter. After the Pacers pushed the lead to 15 midway through the second, the Heat surged back and had the deficit down to eight with 3:44 left in the half. From there, Dunleavy nuked the Heat for 14 points and when T.J. Ford dropped a little floater at the buzzer, the Pacers lead at the half was 17.

T.J. Ford and Jarrett Jack led the way in the third quarter as the Pacers avoided their normal let down after the half and even extended the lead heading into the fourth. A relentless 3-ball assault never let the Heat mount a comeback to make things interesting. This was a 17 to 20-point game most of the night and only appears closer thanks to a late 8-0 run by the Heat after both coaches cleared their benches late in the game.

A few more thoughts on the win: