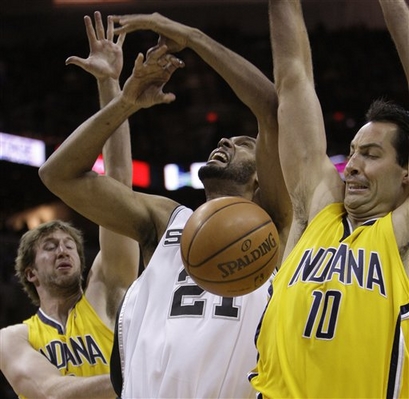 This image captures the mess that was the Pacers loss to the Spurs.
Don't worry Jeff, it won't bite. (Photo: AP/Eric Gray)

I almost forgot what a good road thumping felt like. It's not pleasant.

The Indiana Pacers gradually lost their grip on this game in the first half and the San Antonio Spurs seized control early in the second half while cruising to the home win, 99-81.

The Pacers struggled offensively for the first time in several weeks. The Spurs defense definitely had a hand in the outcome but the 17-point first quarter is all on the Pacers. The pace was actually pretty crazy  in the first considering the teams only combined for 37 points. The Pacers had plenty of good looks and a chance to get off to a good start but instead they had the rims jingling and jangling which ended up setting the tone for the rest of the night.

Once the Spurs asserted their will on the game the Pacers had nothing to bring back at them. Tim Duncan did plenty of damage around the hoop finishing with 27 points and 10 rebounds in only 26 minutes, while Manu Ginobili took care of things from the outside with 26 points on 4 of 4 shots from distance in only 20 minutes of PT. Efficient eviceration.

This was one of those rare nights for the Pacers this year. In fact, you have to go back to the December 13th game at Milwaukee for a similar road loss. The 20-point loss in Denver was a bit deceiving since the Pacers were only down five in the fourth quarter and that was just a crazy shootout.

For a similar weak offensive out put, you have to go back to the December 5th loss at Cleveland which played out similar to this one with the Cavs in control most of the way and the Pacers only putting up 73 points.

Danny Granger ended a 16-game streak of scoring at least 20 points as he sat out the fourth quarter with 17 points. The Spurs defense does deserve some credit for Granger's tough night at the office. No, his shot wasn't falling, but the Spurs were running one or two defenders at him all night and didn't allow him to get off one three pointer.

For a little silver lining, Brandon Rush played 26 minutes and looked real good at the defensive end. He even made a couple of shots and appeared to be out there just playing, which is all we ask. Don't think, just play.

Roy Hibbert finally saw some action in the fourth quarter. Yes the game was decided, but Roy looked good at both ends several times throughout the fourth. I understand the playoff math, but the young big needs some time on the court.

So the Pacers have a couple of days off to regroup before taking on the Houston Rockets on Friday night at the Fieldhouse. With this loss out of the way tonight, hopefully it will be another six weeks before the Pacers throw up another clunker like this one.