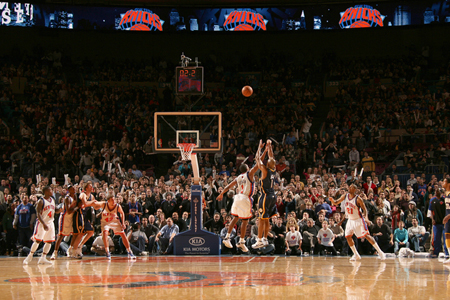 Jarrett Jack knocked down a game-winning jump shot with 0.9 seconds left on the clock to help the Indiana Pacers snap their four-game losing streak and beat the New York Knicks, 105-103.

Especially not after the Pacers lost control of a game in the fourth quarter that they had led throughout. A little lost composure here, a couple of technicals there and way too many turnovers everywhere changed a game that was floating between an eight and eleven-point advantage for the Pacers to a one possession game down the stretch.

In fact, with 3:00 left in the game, the Knicks took a 98-93 lead after completing a 14-2 run. It appeared the Pacers were imploding down the stretch once again as they contributed a few fouls and turnovers to that Knicks run.

Maybe their internal clocks were off, though. Three minutes is an eternity in the NBA and the Pacers were able to gather their composure and put together a quick 6-0 run. While the Pacers continued to struggle to find an offensive hero to step forward, they were able to get a few stops. Well, that and the Knicks contributed their fair share of slop to the messy play.

Then a hero emerged.

Over the final 1:03, Jarrett Jack scored the Pacers' final six points as the Blue and Gold closed the game on a 12-4 run. Jack hit a long, corner jumper, then finished an off-balance layup after taking a bump on one of his Bob Sanders-like drives to the hoop, and finished his night as the hero by splashing the 18-foot game winner in the face of his cousin, Chris Duhon. After the game, Jack mentioned it was especially sweet to hit that shot over his cousin. Sweet, indeed.