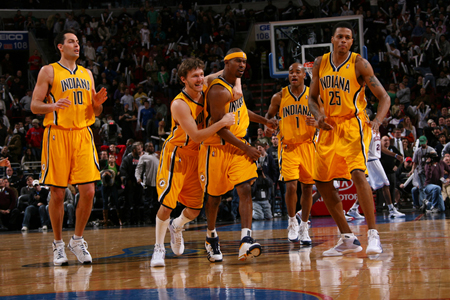 "How sweet is that for these guys?"
(Photo: Jesse D. Garrabrant/NBAE via Getty Images)

Somehow, someway, the Indiana Pacers went into Philly with only nine players in uniform and three of their top four scorers missing, and made the key shot and big stop necessary to earn a win over the 76ers, 95-94. Wow!

The Pacers could've folded several times throughout the night and no one would've blamed them after the physical double OT loss last night. Instead they battled all night and took advantage of a few guys stepping up into big roles. I took some notes while watching the DVR-cast, so I'll go straight to the bullets as I captured them during the game: