The Legend Of Sam Cassell Grows

Share All sharing options for: The Legend Of Sam Cassell Grows

Sam Cassell has been a unique character roaming the NBA landscape for over 15 years now. From his voice to his head to his swagger, no player does it quite like Sam I Am. In fact, his game falls in the category of unique, too, including his insistence on wearing sweatpants and long sleeve T's for practice.

Umm, yeah, about those sweatpants. 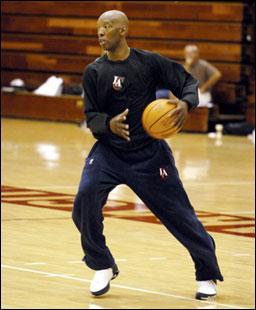 I picked up a bit of info about Sam Cassell's practice habits that made me laugh out loud the other day, so I thought I'd pass it on. On the Dan Dakich Show this past Tuesday, Dakich and Pacers' radio voice, Mark Boyle were off on a tangent which always makes their conversations wonderful listening. They were discussing Kevin Garnett and his intensity in practice which motivates his teammates to practice hard. This includes Sam Cassell who arrived in Minnesota a few years ago without much desire to push himself in practice.

At one point, Dakich delved into a story from a Timberwolves' practice he observed during the KG/Sam I Am era a few years ago with former University of Minnesota basketball coach, Dan Monson. GM Kevin McHale casually dropped a little parlor trick on the two coaches. I'll let Dakich take it from here.

Dakich: Cassell used to practice... I was sitting there on the side with Danny Monson, Danny was the head coach at Minnesota at the time, he was over watching the workouts and Kevin McHale came over and he was sitting with us and Cassell comes in and he (Cassell) always practiced in sweatpants. And McHale looks at Danny and I and he says, "Watch this." He says, "Sam, you wearing underwear?"

He didn't wear underwear to practice as an NBA basketball player (laughter).

Boyle: Well, there you go that tells you how serious he was about practice. (laughter) You gotta show up with something, no?

Dakich: Well, he had sweats on. (laughter)

Boyle: Well, I think you need a little more than sweats if you plan to seriously compete. Just my take on it. I never played at the NBA level but that would be my take.

Dakich: If you played in grade school, you'd know that.

The questions is: When DOES Sam wear drawers? At this point, I'd give games a maybe. But off the court? I mean, if you can't be bothered with underwear for an NBA-caliber practice, it stands to reason al fresco is the call for the rest of the day. Oh, and this was in Minnesota during the winter. Bold.

For those not indoctrinated with Hoosier lore, Dan Dakich was (well, I guess he still is, but he's doing radio now) a college basketball coach and Bob Knight disciple. He was stuck with mopping up the mess of a season Kelvin Sampson left at IU last year. More importantly, and a  fact that is brought up by breathless callers a couple times a show, Dakich is an IU legend, credited with shutting down Michael Jordan in MJ's final college game when IU upset North Carolina in the 1984 NCAA Tournament.

Dakich has a great local radio show and always chats with Mark Boyle at 11:30AM (unless Boyle forgets, then it's after Noon) on Pacers game days during the week. Just prior to the above exchange, Dakich raves about the effort he saw from Garnett. Pretty interesting from a guy who, as a player and assistant under Knight and a coach himself, has been apart of some intense practices in his day.

Here's a link to the podcast: Crosstalk with Dakch and Boyle

Beware, the podcast is massive (32:21) so HUGE thanks to Chris May at 1070 The Fan for posting this monster after the fact. The Sam sans drawers portion is around the 11-minute mark.