Share All sharing options for: Prayer For Granger Part Of Extension Equation?

Danny Granger visited an orphanage in Surabaya, Indonesia when he went to work with the DetEksi Basketball League this summer. He spent time with the kids and workers, donated some money and lifted everyone's spirits. 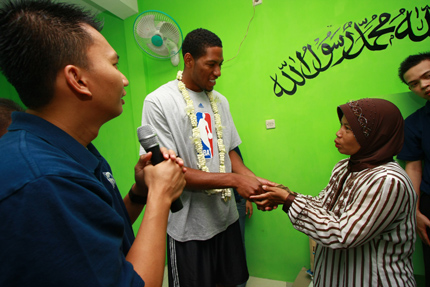 The leader of an orphanage in Surabaya offers a
prayer in appreciation for Danny Granger's help.

Well, it turns out that Danny may have received more back in return for his kindness than he initially realized. In fact, some from Surabaya believe that Danny's contract extension was helped along by the prayers offered on his behalf to reward him down the road for his generosity during his visit.

We joked around in DBL about the news. When Granger was in Surabaya, when he visited the orphanage, after he gave his personal money for donation, a lady who ran the orphanage held Granger's hand and read a prayer. In the prayer, she was hoping that God will give Danny back for his kindness to the orphanage. Prosperity in this world and happiness in the afterlife. I guess it came true also!

Go Danny Go! Now everyone of us in DBL is hoping Granger can become an All-Star soon because that is what we wish for him in writing in our newspaper (the good luck messages were written by a lot of basketball people in Indonesia. From the head of Indonesia's basketball organization to high school players throughout the country).

The heartfelt prayer of a humble woman, who has to count on spiritual blessings as the reward for her work, certainly didn't hurt Danny. So all Pacer fans should offer their positive thoughts or prayers for the kids and workers at this orphanage because if this blessing helped even a little we should all be thankful.

Next stop for Danny, the All-Star game. You gotta believe.