Share All sharing options for: Pacers 113, Hawks 96: Rested And Ready To Win 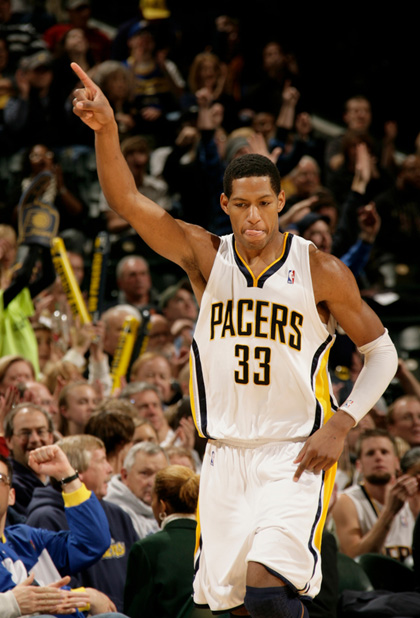 Danny Granger could taste the W against the Hawks.
(Photo by Ron Hoskins/NBAE via Getty Images)

The Indiana Pacers came out fresh and ready to attack the Atlanta Hawks from the opening tip Tuesday night. By being the aggressor most of the night, the Pacers were able to take an early lead and hold it throughout the game to seal the 113-96 win.

T.J. Ford set the tempo from the opening tip, literally, as he scored on a little runner at the hoop to open the game. The offense was pushing the pace, moving the ball, getting good looks near the hoop. Jim O'Brien stayed away from small ball tonight and his big fellas made him look like a genius. Rasho Nesterovic, Jeff Foster and Troy Murphy put up a huge combined effort.

Danny Granger came out real aggressive in the first quarter. After missing a game and then struggling in the next two games, Granger was rested and ready to go and it showed. He attacked the hoop from the get go and was real active all over the court including a couple of nasty blocks of Hawk layup attempts.

Danny played the role of team leader starting big and finishing strong. His 34 points was a season best and included 10 points scored over the final five minutes to help put the game on ice. Real efficient efffort, too, making 13 of 18 FGAs (4-5 from 3 land) along with all 4 free throws.

If you're like me, you may be asking where this effort from Danny was during the last two games. Well, Danny was coming off a little nagger of an injury and had to play back-to-back games.  A superstar level player can bring a consistent effort every night, whether he's battling through injury or fatigue.

Maybe Granger is at the point in his evolution as an NBA star that he still needs a little rest to be effective. If he's a little nicked or tired he's merely a good, solid player instead of a carry-the-team type of player. There are plenty of great players in the NBA that fall into this category, so this is an area of development to keep an eye on.

But enough about Danny, this was a great team victory that deserves several plaudit filled bullets, so let's get to it: