Share All sharing options for: Jarrett Jack: The NBA's Answer To Bob Sanders 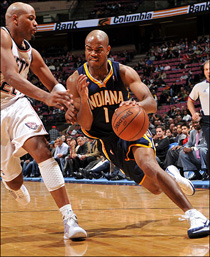 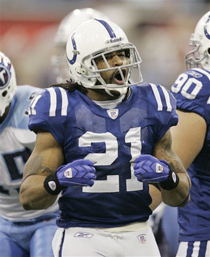 Jack and Sanders both enjoy bringing the game to you.

Jarrett Jack has played a huge role off the bench for the Pacers to start the season. While he doesn't start, he often finishes games and does it with excess effort and intensity.

The more I watch him, the more Jack morphs into a comment I've made in passing that he is the Bob Sanders of the NBA. The guy plays hard, has no idea how to dial it down and has no problem taking it to the hole and initiating contact. His mistakes are gaffes of aggression or trying to do too much. Even in error, the effort is evident.

Jack has shown he has stones to make big plays, too. Consider the huge play he made in the fourth quarter of last night's win in New Jersy.

Early in the fourth quarter against the Nets, the Pacers pushed their lead to 13 points. The Nets then went on a run and suddenly with just under eight minutes to go, the lead was down to five.

After a Pacers timeout, they needed a play to stop the bleeding. Jack took care of the heavy lifting, steping out to knock down a 3-ball and let everyone in blue and gold exhale and get after it again.

I love Jack and the role he is playing for the Pacers. The key with Jack is to not dwell on what he isn't. He doesn't have the all-around point guard game, like T.J. Ford. If he did at his size, he'd be a perennial All-Star, making max money and certainly not coming off the Pacers' bench. 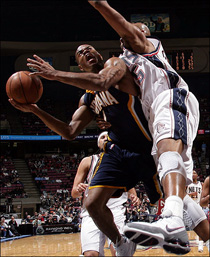 Jarrett and Bob will Jack you up!

So with his NBA skill set in persepctive, let's celebrate what Jack is. He plays point guard but he's not a point guard for the Pacers. Jack can certainly handle the point but he has probably played more minutes as a shooting guard alongside T.J. Ford or Travis Diener.

Nope, Jack is simply a player filling a need off the bench much like Marquis Daniels. A utility player willing to defend anyone on the court or make a play on offense. It may not be the prettiest basketball play you'll ever see but it will be done at full speed and more times than not, will bring you out of your seat applauding the effort.