Share All sharing options for: Pacers 98, Nets 87: Together Pacers Can 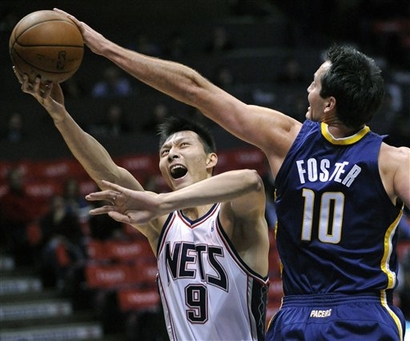 Foster was havin' none of Yi at the hoop.
(Photo: AP)

Tonight, with Troy Murphy still in Indy, Danny Granger was a late scratch after he dropped in warm-ups with a severe leg cramp. So, the Pacers were missing three starters on the road against a familiar team. All you can do is go to the next man and keep grinding. The Pacers did just that, escaping the Izod Center with a hard-earned 98-87 win.

It was no work of art, but like my kids' paintings, I'd proudly pin this W on the fridge. This whole team effort, selfless play, picking up your teammate thing the Pacers are doing is getting ridiculous. I mean, I couldn't be much more positive and after these last two Ws even I'm running out of syrup. If this keeps up, I'm going to have to hit Costco to store up on the bulk Log Cabin.

The plane flight home should be joyous after this team effort, as the Pacers once again, take care of their business. Here are some more thoughts on the win:

So beautiful, in fact, I think I'll stop here. I could go on, but I think you get the picture. Feel free to add your favorite observations from the game in the comments.