Nightmare Ant Has A New Challenger In Town

Share All sharing options for: Nightmare Ant Has A New Challenger In Town

The Indiana Pacers D-League affiliate is the Fort Wayne Mad Ants, a team that has produced some solid talent on the court and some extraordinary publicity off the court. They really put the "fun" in Fort Fun last year thanks to the leadership of their young and creative owner, Jeff Potter.

Ridiculous Upside has a great interview with Potter here as he discusses his approach to generating interest in his D-League franchise and what issues (*cough SALARIES cough*) are holding the D-League back from being a first class option for players trying to reach the NBA.

Of course, there's also talk of the star of the Fort Wayne show, Nightmare Ant. Skeets and Deadspin have push Nightmare Ant into the Interwebs stratosphere, but it appears there may be a another slightly psychotic mascot challenging the Nightmare Ant for the Fort Fun spotlight.

The local minor league baseball team has gone in a new direction and changed their nickname to the Tincaps. Apparently,Johnny Appleseed wasn't just a legend in some childrens books but a real American pioneer who is buried in Fort Wayne. So the Tincaps are an homage to Mr. umm...Appleseed.

Check out the mascot for the Tincaps. Never in my life have I seen such a vicious apple. No doubt he has his eyes set on an eventual showdown with Nightmare Ant. I'm smellin' a pay-per-vew picnic at a Johnny Appleseed Park in Fort Wayne. Let's get it on! 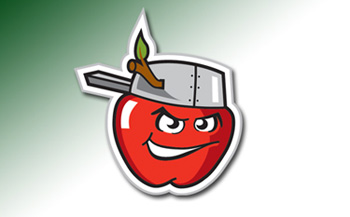